The gates are open! Everyone wants a spot in the Top 100 to get into the Closed Alpha testing!

📢 The waitinglist is live by now! Click here to check it out 📢

We already told you about the importance of building a healthy community. Now it's time to get you prepared for the waitinglist and everything around it. This is to give you all the information you need to have a great experience while participating.

The core of the waitinglist is the leaderboard. As explained in the last article, the members here earn their spot on the Closed Alpha.

The first Top 100 members on the leaderboard on a certain date will have the privilege to be the first players that will be able to play Knights of Cathena.

But this is by no means the end of the story. There will be several snapshots and thus additional chances for waitinglist members to earn a spot in the Closed Alpha as this will be an ongoing event.

There are several planned phases each with a different amount of players and with a fixed duration that varies from phase to phase. The idea is to steadily increase the amount of users to handle potential bugs in the most efficient way.

The schedule for the different phases will be the following:

Disclaimer: Keep in mind that this schedule may change in the future

Besides the privilege of playing the game early before everyone else and helping us to reach the best quality for the Alpha release (which is of course the most valuable reward in itself) there will be some other benefits.

At the current state of things we do not want to make false promises, that is not how we do things. So we can't reveal the details by now. But we can asure you that there will be rewards in form of our Token $CGO and/or NFTs.

Once the Alpha test is completely defined we will announce the additional benefits in detail.

Before You Go - Questing

Some of the quests and achievements come with some technical limitations (not on our end of course) and we wanted to explain them in detail here.

Some quests and achievements can take up to 1h before your well earned 💠XP gets distributed to your character.

There will be a certain interval where we can fetch quest and achievement updates and reward 💠XP which we will display in the quest module (image below). But that doesn't mean your always receive your 💠XP after each interval, it might be that updates take up to 4 intervals which would be about 1h. 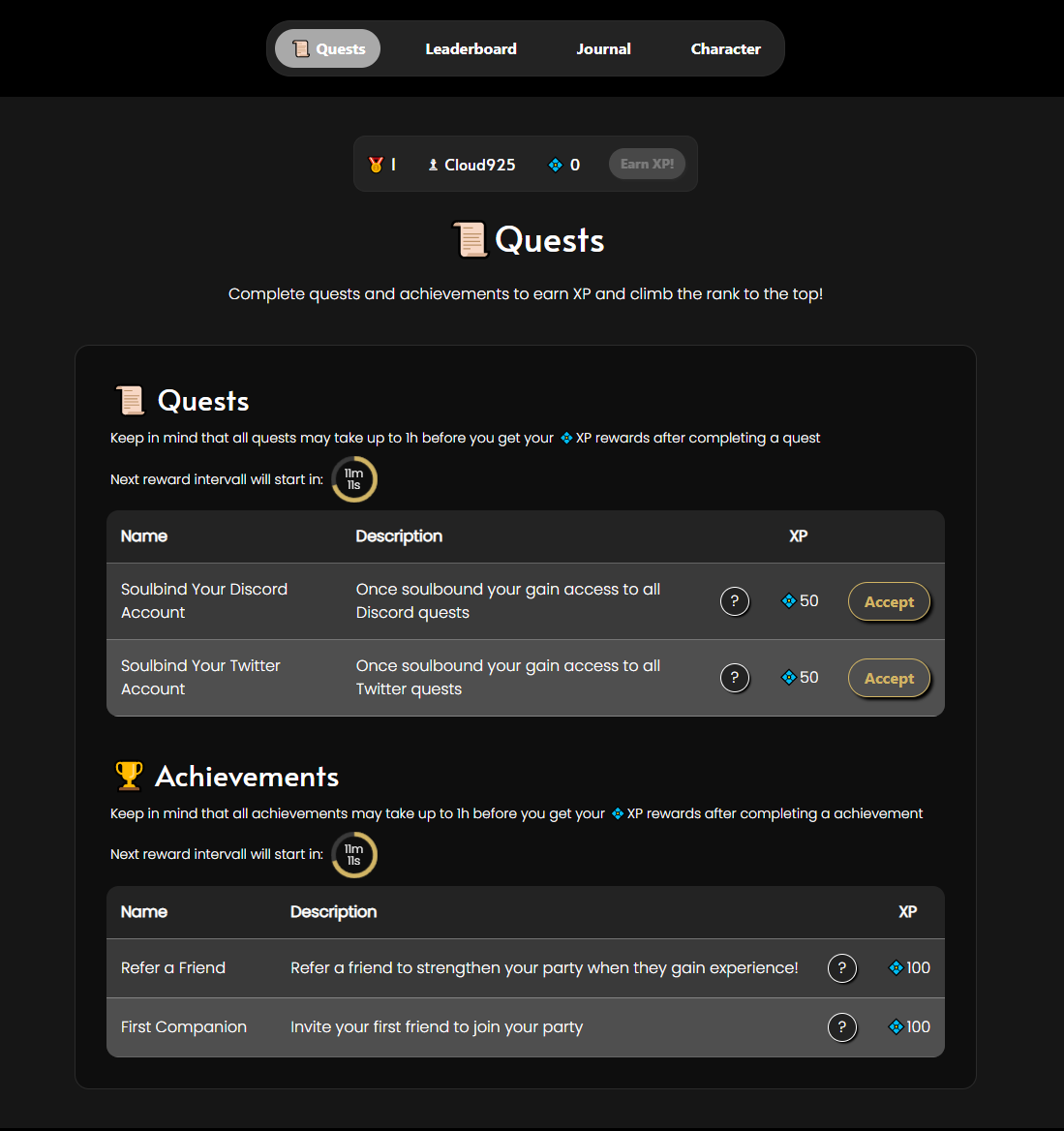 For all quests or achievements related to actions on Twitter we can't reward your 💠XP instantly.

Even for some Discord quests (where we are not able to listen to realtime events) you will experience a 💠XP reward delay.

In the meantime, don't forget to join us on our socials, if you haven't already: